The POZcast with Adam Posner Shines a Light on Tucker Max: From Fratire King to Self-Publishing Empire 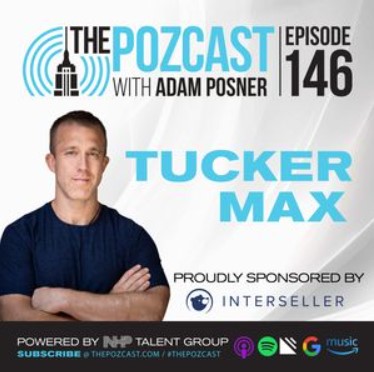 Tucker Max is the Founder of Scribe Media

Most people know Tucker Max as the founder of Scribe Media. Even though Tucker Max is a lawyer by training, he quickly realized that this was not for him. He hated just about everything about being a lawyer and describes the field as having to “sell your soul” just to be successful in any way. While many people are concerned about not using an advanced degree once they have it, Tucker realized that he needed to get out of the industry before it was too late. He spent two years in Hollywood, which he describes as the worst two years of his life. He realized that many people who live in Hollywood and work in his industry, are sociopathic, soulless, and narcissistic. Because Tucker Max did not want to end up like them, he decided to get out. That caused an abrupt career change, leading him to Scribe Media.

His career took off when he started a blog on his website, tuckermax.com, where he created a new genre now known as “fratire.” This word was used by a writer for the New York Times, Warren St. John, to describe the exact nature of Tucker’s writing.

On his website, Tucker mostly shares unique stories from the life he led during his twenties. His writing has become popular because many people like how Tucker makes fun of his younger self, and the partying he did. Tucker has also been blessed (or cursed) with a personality that always leads him to tell the truth, no matter what. This type of “fratire” is discussed in-depth during the podcast.

Tucker Max originally got into the legal field to help other people. Even though he did not get to do exactly what he wanted to as a lawyer, he does get to spend his life helping people at Scribe Media. Many of his clients are surprised because he makes them read their book out loud before he agrees to publish them. This comes from Tucker’s own personal experience. Some people do not realize exactly what they should change about their writing until they are forced to read it out loud. Even though many of Tucker’s clients have edited their work on paper many times, it always sounds different once it is read out loud. Tucker believes he can better help his clients this way. Tucker Max has written 4 New York Times best-selling books, including ‘I Hope They Serve Beer In Hell’.

Buddha’s Core Principle and the Drive To Change

Even though it has taken him more than four decades, Tucker Max lives his life, and runs Scribe Media, by following Buddha’s Core Principle. First, you must do your work. Then, you can help others do theirs. This principle guides all of Tucker’s decision-making and has made him a better person.

It has also helped him change, becoming the person he is today. If you want to see real change, then you must change yourself. Tucker went through a lot of this when he decided to leave his legal training and experience behind; however, he has found another fulfilling career that has made him a New York Times bestselling author 4 times. Tucker Max, and his unique journey through life, are discussed in-depth on The POZcast with Adam Posner.

About The POZcast with Adam Posner